I’ve been told confession is good for the soul so here we go: I’ve seen Black Panther four times already! Whew. There I said it. Quite honestly, I might go see it again. Why? If you are asking that question, its possible this is your first introduction to the thoughts and aspirations I have as a scholarly minded Black male who is Black community-conscious, a decedent of King, El-Malik, DuBois, and Hughes, and wants to do his part in making the world a better place to live for his race. Sounds quite Wakandan, huh? Which is why I and so many others like me are drawn to Black Panther.

For some, Black Panther is just another action film in the Marvel Cinematic Universe for but for millions like me, BP represents all that we are and can become as a unified people of the Diaspora. A powerful country unaffected by colonization (basically, white influence). A nation strong in tradition and unapologetic in its BLACKNESS. There are powerful black women who are bad ass in EVERY way imaginable. There is a king with a pure heart and desires to do what is right for his people. There is a system that allows everyone to thrive within its borders. And while there are evidently class systems that exist in Wakanda, each tribe gets a shot at the throne in ritual combat. It is the shot for the top spot that drew me to the tribe of the hood, The Jabari Tribe, led by M’Baku.

In the Margins (or mountains)

I grew up in the hood. Oak Cliff, Texas. Village Oaks to be specific. If you are familiar with this part of Dallas, you know that my hood sits isolated downhill on Overton Road behind Interstate Highway 45 separated from South Dallas by the Trinity River. There is nothing near my hood except a train track, an old wreck yard full crate containers and other junk, a recreation center (gotta have one of those), and an elementary school. My hood is in the margins. Only a short drive from Downtown Dallas but if you don’t know where it is, you will miss it. It can’t be seen from the highway. It can’t be seen from its main cross street of Illinois Street. Isolated. Kinda like the mountains where the Jabari are.  High in the mountains. Isolated.

In the onset of the movie, N’Jobu, N’Jadaka’s (Killmonger) father, tells the story that the Jabari isolated themselves because they didn’t want to be ruled by the king of the Panther tribe. However, we know that sometimes history has a way of being shaped by those of the dominant culture. Like my hood, out of sight often means out of mind, and when those among us have the ability to change our circumstances (the Talented Tenth, the Bourgeoisie, the Uppity negro) , they hardly ever do, as witnessed by the glory of Wakanda and its technological advancements that seemingly failed to make its way to the isolated mountains of the Jabari. The margins. Ironically, N’Jobu, planted in the hood of Oakland, realizes that Wakanda has forsaken the hoods of the world, the marginalize, the oppressed… and from that Killmonger is born with desire to give the Hood a seat at the table!

The Hood Is Where It’s At

Lets just be honest: the world needs the hood! Without the hood the news outlets would have little to report, the culture vultures would have nothing to steal, hip-hop wouldn’t be the genre of choice for the world, the inspirations for fashion that rips the runway would still be on the racks, and the grit, fortitude, and fight that makes us such a resilient people wouldn’t exist. The athletes we love to watch, the entertainers we love to emulate, the swagger we love to jock… hood. There is no Malcolm, no Mandela, no Migos without the hood! It is the hood that births dreamers and freedom fighters.

I’m not just talking about inner city ghettos and poverty-stricken townships. I’m talking about every place where Black and Brown people around the world gather for life, to overcome the struggle, to survive, and to thrive to overcome the extremes of their societal misfortunes. All of the places where community exists for the edifying of all who make up that community and not just the elite, the hood. The beautifully dysfunctional hood. The roses that break through the concrete to reveal the beauty that lies beneath… The hood.

The Hood Saves (The Jabari Come Through)

In our fight to save all that we’ve worked so hard to obtain, we are going to need to ask the hood to save us. The reason Killmonger was a villain many of us could ride for, is because he is us! Every black male living under the tyranny of an empire (yes, that includes America in case you were wondering) that treats us like disposable animals, can relate to a figure who wants a seat on the throne to change our circumstances. We were low-key (and many of us straight up) excited to see Killmonger toss T’Challa over the cliff into the river because for once, even if for a little while, one of us was on top. We were rooting for T’Challa but he’s not one of us. Killmonger is… M’Baku is.

If there is no Jabari fisherman (hood dude hanging at the banks of the river), T’Challa would’ve been fish food. When everything seems hopeless for Queen Auntie (Ramonda) and Princess Clapback (Shuri), where does Nakia take them… to the hood of Wakanda, the mountains of the Jabari. This is the first time the Jabari come through. Sitting like a boss on his throne, the Mountain King of the Hood, takes no mess from outsiders, boogie Wakandan or otherwise. If you’re not from the hood, you can’t understand that there are two kinds of people not really welcome: the colonizer and the Uncle Tom. After an appeal for M’Baku to save them from another hood dude, M’Baku shows them their beloved King T’Challa, rescued from the river, on ice to keep him from dying (SN: We always have to put something on ice to flex on a hater every now and then).

Come through number two happens when the Dora Milaje (one group of those bad ass black women), Nakia, and Shuri find themselves surrounded by the Border Tribe (who are kinda hood but not quite, that why the rock with N’Jadaka). Out of nowhere, like real HOOD (a more optimal word comes to mind) dudes do, the Jabari pop up to handle up! That’s what the hood does… it saves the day. 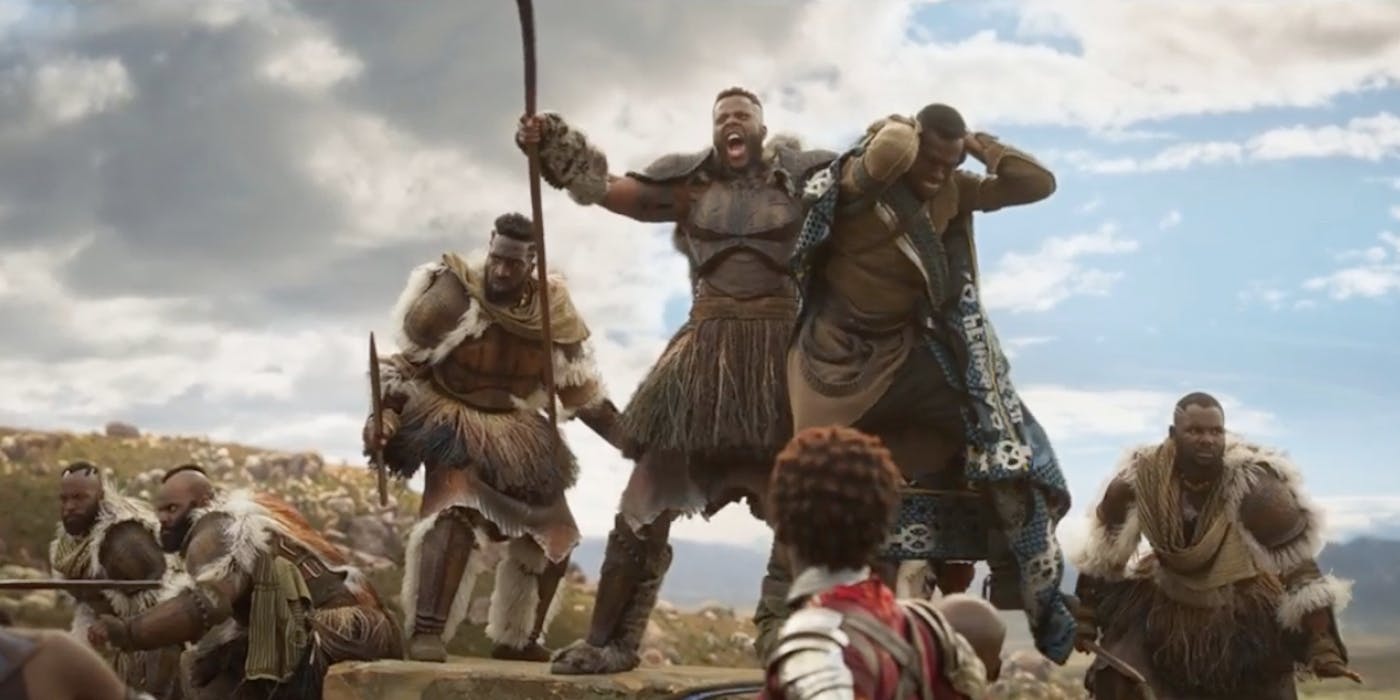 A Seat at the Table

When the battle is over and T’Challa has defeated Killmonger, the first person we see who now has a seat at the table is M’Baku. When T’Challa is brought back from near death, M’Baku checks him and lets him know that his people has forgotten about the Jabari. None of those bougie kings made their way to the hood and because of it their relationship wasn’t what it could be. T’Challa, being a good king, understood the importance of having M’Baku at the table if Wakanda was going to change the world for blacks all over the world.

If not for N’Jadaka aka Killmonger (using tribal names is important to me if you haven’t noticed) and M’Baku, two men from the hood, putting pressure on T’Challa and the Wakandan elite, T’Challa wouldn’t be the king we are hoping the sequel shows us he can become. If we don’t give our hoods around the world a seat at the table there will not be any real unity within the Diaspora, and consequently no changes to the oppression we face in the world. As we saw in Black Panther, we have to acknowledge the wrongs done in the hood: those caused by the colonizer and those ignored by the Black and Brown elite.

We don’t speak for the hood just because some of us come from there, and we don’t speak for the hood because we think we know what’s best for it. The hood speaks for itself when we give it an opportunity to. It is our job, those of us who have access to the table, to add a plus one and give them room to speak themselves. When we provide platforms for them to speak, they will be heard, and the world will be even better when it chooses to listen.

2 thoughts on “The Jabari Tribe: The Hood of Wakanda”