One of my favorite sporting events to watch, especially around this time of year, are track and field events. Whenever the Olympic Games are approaching, I yearn to watch some of my favorite athletes take the track: Can Allyson Felix repeat her world-class performances and bring home another Gold? Who will break Usain Bolt’s records for the throne as the fastest man in the world?

The anticipation is overwhelming!

And yet while I truly love the individual races, what captivates my attention most are the relay races. The excitement of observing four distinctively different runners, all individually talented and athletic, sync together as one for a common goal: to become the first team to cross the finish line. None of the other events require the precision and perfection of the 4×4 relay. There many aspects of the relays to marvel at: the speed and athleticism, the suspense of potential record-breaking times, and the glorious bragging rights as the fastest country in the world.

But it is the baton exchange that means the most to me.

In my understanding of track as an observer (I do not claim to know anything more about track than that which is visible to the eye, and I have not personally run a race since the Field Day games in primary school), the exchange from one runner’s hand to the next can win or lose the race.

The exchange in so important because it is the baton that gives legitimacy to the runner. Without the baton, the runner is not counted in the race, and if one of the runners were to drop the baton, the race is over for that team. Their speed and athleticism, their potential record-breaking time, and everything else becomes irrelevant.

Not one person on the team is celebrated, regardless of their personal speed and abilities, and they all fail when the baton is not adequately passed.

The passing of the baton is vital to the success of the team.

The same is true for the leadership of Church.

The leadership of the Church is a huge relay team, seeking to bring home the Gold for the Kingdom of God. In this race, however, there are no medals. No bragging rights (or shouldn’t be). Just praise to God for God’s goodness and mercy being extended to us to make the world a better place.

And there are no records to be broken, just the tearing down of strongholds, mending divisions, and dismantling injustices and inequality that hinders God’s creation from reaching its greatest potential. While there are great “runners” (pastors, bishops, superintendents, laity, etc.) on the team, all capable of individual greatness, it is only when those individuals put their personal gifts and graces together for the sake of the team are they able to experience the success granted to such selflessness.

As this ecclesiastical relay team seeks to sync to become one, it must realize the passing of the baton is vital for the success of the Church. One may assume from my suggestive tone, I am alluding to elders relinquishing their positions or responsibilities to younger, equally qualified persons for the advancement of the church.. And I am… partially!

It is not just the passing of the baton from elder to young but the passing of the baton from all individuals who have run their “leg” of the race. Often the baton of leadership within the Church has resulted in a sense of power or authority that has stifled and hindered the Church from moving forward. Some individuals who have grown accustomed to lifestyles, positions of importance within communities, and prestige offered to certain offices with the Church often forget the goal of the race. The relay becomes an individual event to highlight themselves above the team, and baton is either never passed or dropped.

Others have become complacent with the accomplishments of the past and hold on to the baton in a quest to remain in a glory they had many races ago. They want to continue being the 1st leg of the race when they no longer possess the capabilities required to hold that position. So instead of passing the baton, it remains in their hand too long to finish the race. Whatever the reasons are, in order for the team to win, we have to understand the importance of passing the baton which allows for the greatest chance for God to be glorified by our team’s effort.

Holding on to the baton in the race does not mean we are the most powerful, most authoritative, or even the most qualified. It often means we are the most selfish, most self-centered, and the least interested in the team’s success. A smooth pass of the baton ensures each leg of the race is adequately put in position to do their very best for the success of the team. The team’s success is riding on each successful pass. If we are truly concerned about the current state of our world, and how the Church can assist God in the healing, restoration, and edification of all of God creation, the baton exchange is vital. When we dare to take the track with one mind, one agenda, one common goal: to see God’s goodness extended throughout the world, and witness God’s creation live to its godly potential, we too can bring home the Gold for Team Kingdom, and that’s a an accomplishment worth running for! 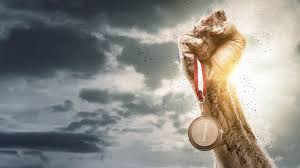 One thought on “A Smooth Pass”