I can count the moments on one hand where I have been liberated to grow deeper into a conscious understanding of who I am and my relationship to others, especially in this social construct of race. The first moment of liberation happened when I was about 19 years old. My grandmother and I were at the funeral in a rural town in Louisiana. We had a hotel room at a fancy casino nearby, and upon waiting for the elevator, a couple of White people joined us. When the elevator came, my grandmother politely suggested she wanted to wait for the next one. When we finally got on, I asked her, “Why didn’t you want to ride with them?”

Her reply shook me. “I will never forget what they did to us,” she said.

“Surely my grandmother didn’t have any resentment toward whites?,” I thought.

This was the first time I had ever heard my grandmother speak on race, and how it affected her. For as long as I could remember, my grandma worked and served as a registered nurse. Some of her most cherished patients were white people. One patient supplied us with tickets to Dallas Cowboys games. I’m talking about “50 yard line” kind of tickets.

She later revealed to me how she became this patient’s nurse. Grandma is “light-skinned”, and when it came time for her patient to decide who would serve her, she picked Grandma because she thought Grandman was white! She later discovered my grandmother was the daughter of a bi-racial mother, and had her mother’s complexion, but by this time she had grown to like Grandma very much. The reason the elevator encounter was so liberating for me is because it opened my eyes to see my grandmother’s history with racism, and gave me more understanding of race and the race relations I’d had and would eventually have.

The second and third liberating moments happened simultaneously when I walked into Dr. Valerie Bridgeman’s Introduction to Hebrew Bible class during my first year of seminary. I was first liberated from my patriarchal ignorance to behold the brilliance of a Black woman so free: freedom in her expressions, free from the judgments of the majority white classroom, free from the construct of time…she was care-freely late to class that day!

Secondly, and more importantly, she liberated me from chains of the shallow, traditional theological reflection of the Hebrew Scriptures I learned in church, and challenged me to explore the scripture as a scholar and not a Christian. She explained how easy it is to read the Scriptures through the eyes of others, especially our oppressors, and if we are not diligent in our study and asking questions in faith, we would become victim to others interpretation. Those moments sent me on the quest for understanding I continue to this day.

Now enter my self-care regiment of going to the movies. While watching famed comedian Jordan Peele’s directorial debut movie, Get Out, I sat in the theater amazed at how someone was able to depict the freedom to be a Black man in relationship with a White woman, the apprehension of being a Black man in said relationship when in the shared space of other Whites, the horror of being Black in a White dominated society and/or space, and the desire to simply GET OUT from under the oppression, expectations, and threats of White people all in one film.

I must admit, I had no intention or desire to see this movie. After reading dozens of Facebook posts, Tweets, and other raves about this movie from colleagues and friends, I decided to go see it. The previews didn’t compel me to do anything but dismiss it as another horror film that wasn’t worth my time or money.

Boy was I wrong!

From the onset, I was intrigued by the relationship between Chris (black) and Rose (white). Rose’s perception as “woke” and the description of her family as “President Obama voting” liberals led Chris to believe his anxieties of their relationship in her parents eyes was only in his head, and held no realistic truth.

Almost every Black person can relate to Chris’ anxiety and apprehension. More often than not we have to put on the game face of double consciousness in our dealing with White people. We often struggle to find the common ground that allows us to be our most authentic selves without the fear of offending them with our Blackness. Interactions with some White people typically consist of micro-aggressive comments about their love of black people, normally the one or two they happened to have a slightly better than cordial relationship with, or some celebrity they admire. Chris’ interaction with the White people in the movie is something many of us have experienced one time or another.

When the anxieties in Chris’ head become reality, he seeks kindred connection in the few other Black people at the house. Again, I can relate to brother Chris. There is nothing more refreshing than seeing another Black person when one has been surrounded by Whites. We make eye contact, hit the “head nod” or some other way of communicating non-verbally to signal “we good!” Occasionally, however, the connection is not there, or the sentiments of isolation and disconnection are not shared by the other Blacks, and we feel even more alone than before. That’s when we have to hit the homie up via text message to let them know “I’m ready to get out!” 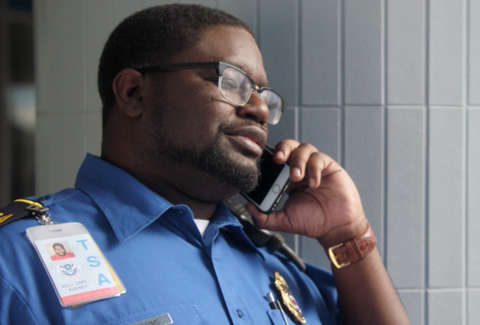 Most striking about the movie, as I witnessed it, was the concept of what would actually happen if liberal Whites acted on their micro-aggressions? Oh, that’s right… they have and they do. The genius of this film is that it exposes the misnomer that race does not play a role our love interests, our relationships with other races in a Post-Obama era, and brings forth the notion that self preservation is vitally important to our “I don’t see color” brothers and sisters. Peele drew upon the psyche of many Black men in America who desire to exude self-pride without having to compromise for others. He masterfully created a film that put the horror of being Black in America: the fear of not being accepted because of our melanin, the threat of being hunted, maimed, and murdered for convenience, the auctioning of our bodies for White gain and advancement, and the hypnosis of perceived freedom only to be controlled by systems and schemes.

So why was this movie liberating? For much of my life, I have operated by the double consciousness I have been programmed to believe must exist to survive in racially-constructed America. The fear of being too black around colleagues and those I have been called to serve is often burdensome. Tip-toeing around social issues that affect my people at the expense of White comfort, speaking less candidly than I desire in order to acquiescence to the populace, and even searching for the more grammatically correct words in conversations, is nothing more than assimilation.

This movie empowered me to engage Whites and others with one consciousness… Black! This isn’t an assault on all Whites, because as those close to me are aware, I am driven by a love ethic for all of humanity. Yet I also acknowledge my created difference: my blackness- that component that draws me to rhythm on the 2 and 4, to love deeply and engage life poetically. The deep, beautiful melanin and strong features that make me unique in the Creator’s eyes, and my peculiarity should never be compromised at the expense of others.

I had a conversation with one of my brothers about a shared experience. He said to me, “Bro, I often feel like the dude in that movie, Get Out. I’m trying my best to break free but the system won’t let me go.”

One thought on “Liberated to Get Out”